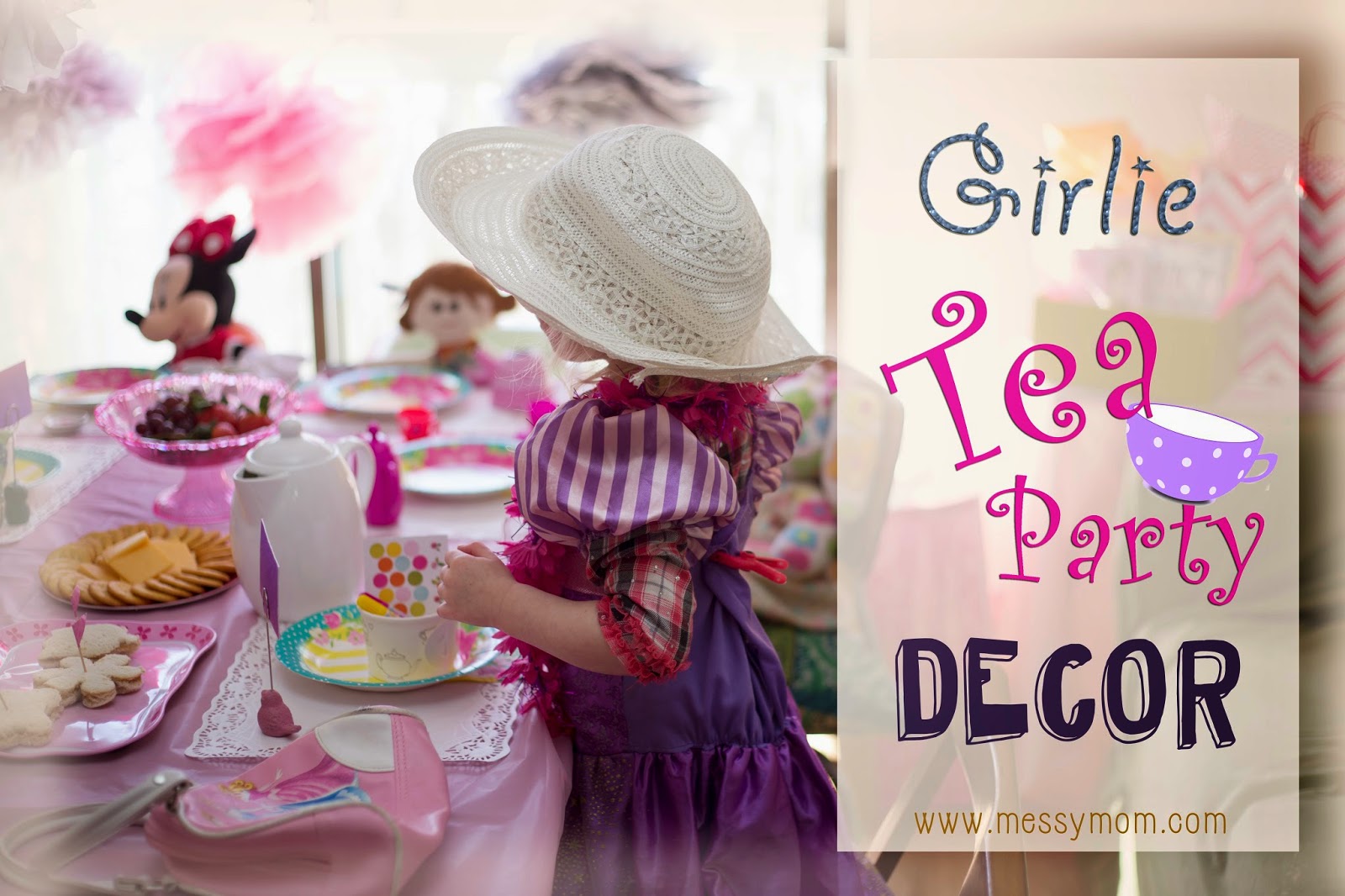 After weeks of planning and hours of preparation, the day finally came for SJ’s birthday party. Of course I wasn’t nearly as organized as I thought I was, despite my best efforts. We were still frantically setting up when the first guest arrived and I didn’t manage to get all of the decorations out, but I should know by now that those things happen. The party was still a huge success and everyone loved it, especially the birthday girl.
Today I am going to show you some of the decorative touches and tomorrow I will reveal all the cute photos of the girls having a blast with all the party activities. 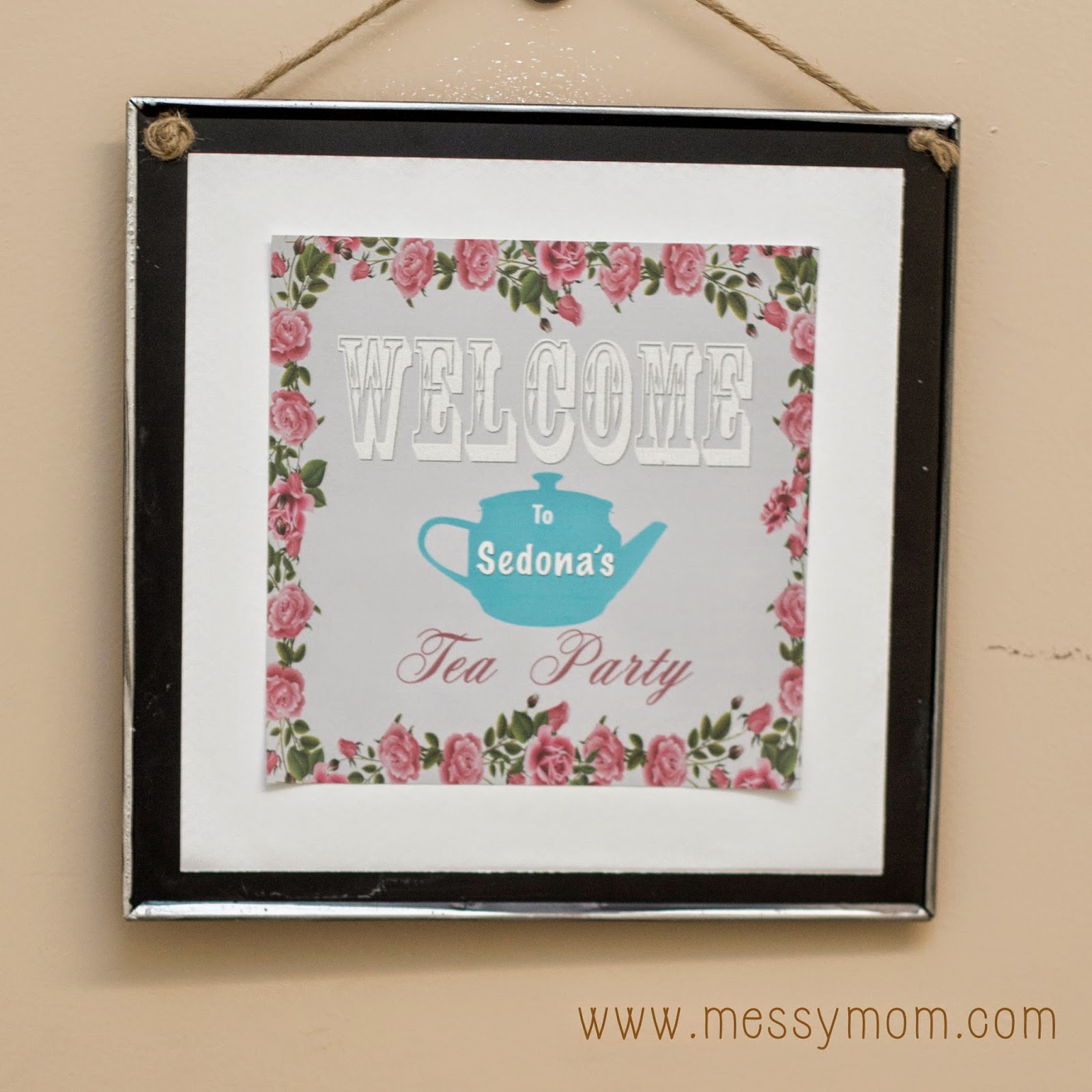 I got this chalkboard at Michael’s and had the best intentions of learning to do some killer chalk art. Did that happen? No, but a homemade printable works just fine. I used the same teapot clip art throughout the party prints and you can find it for free at Pixabay . 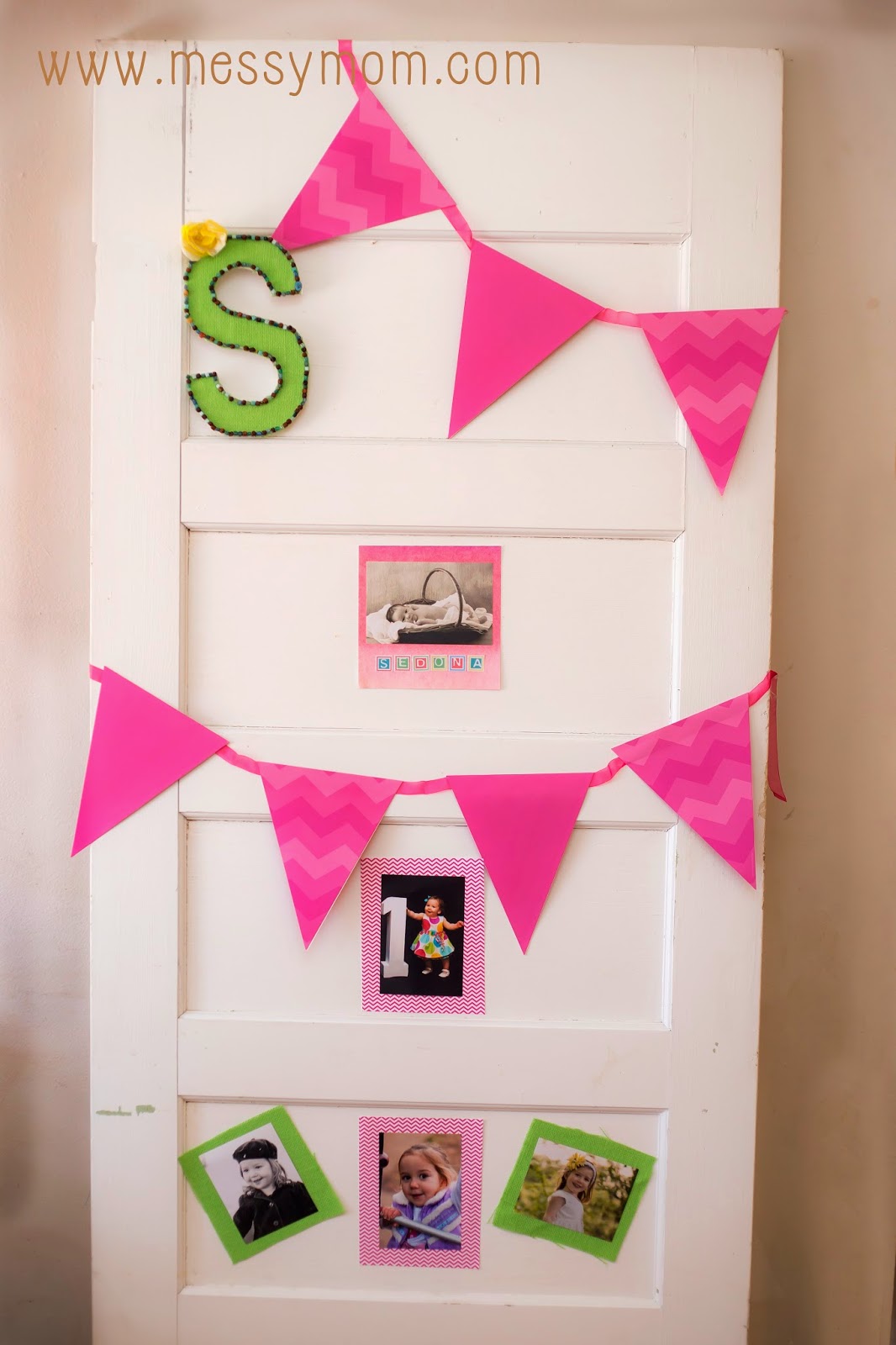 This old door used to be the headboard on our bed, but we never got it set up in our apartment so it’s just been propped up in our hallway. I decided to decorate the door with a pennant banner, a wooden S that I embellished, and one photo of SJ from each year. 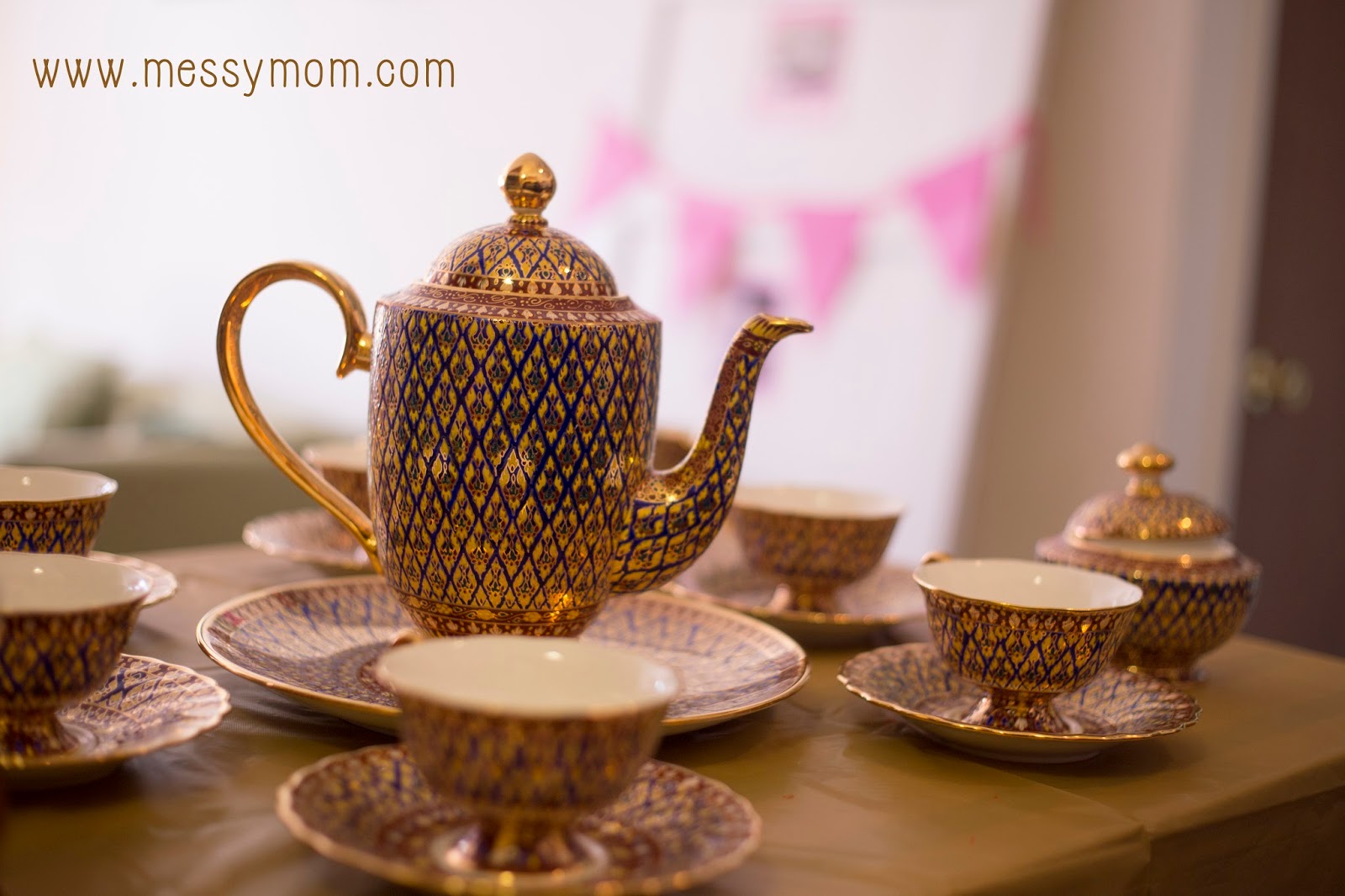 Part of what started the whole tea party idea was this tea set that my mom has from Thailand. It’s never been used and we’ve always talked about having tea time with the girl’s when they were old enough. Even though it was there for the adults, it was a lovely addition. I even had sugar cubes, cinnamon sticks, and mint leaves. Oh so fancy!

The best part of the Tea Party were the special guests that attended. I shared all about them when I wrote “Her Toy Story“. Each of the stuffed animals were propped up using pillows, boxes, and even baby highchairs. 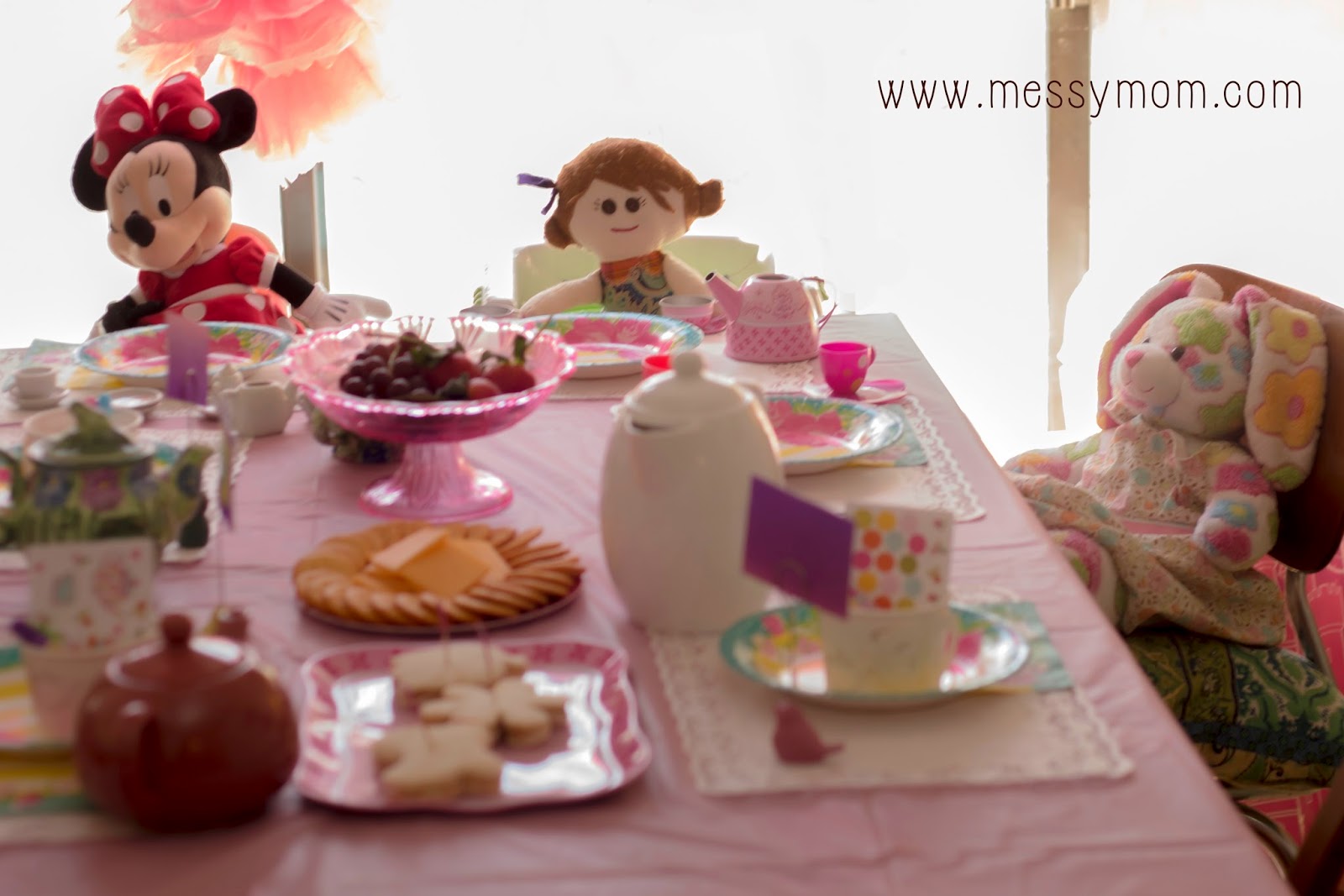 Some of them dressed up for the occasion, and the bunny even had fake cochlear implants (two of the girls at the party are deaf). They each had their own playtime tea set as well.
There was snow everywhere outside, but inside we were surrounded by a flowery whimsical atmosphere. Most of the items for the place settings came from Hobby Lobby. Their spring items were 50% off so it worked out great. I also borrowed a lot of stuff. Each girl had a teapot full of apple juice! 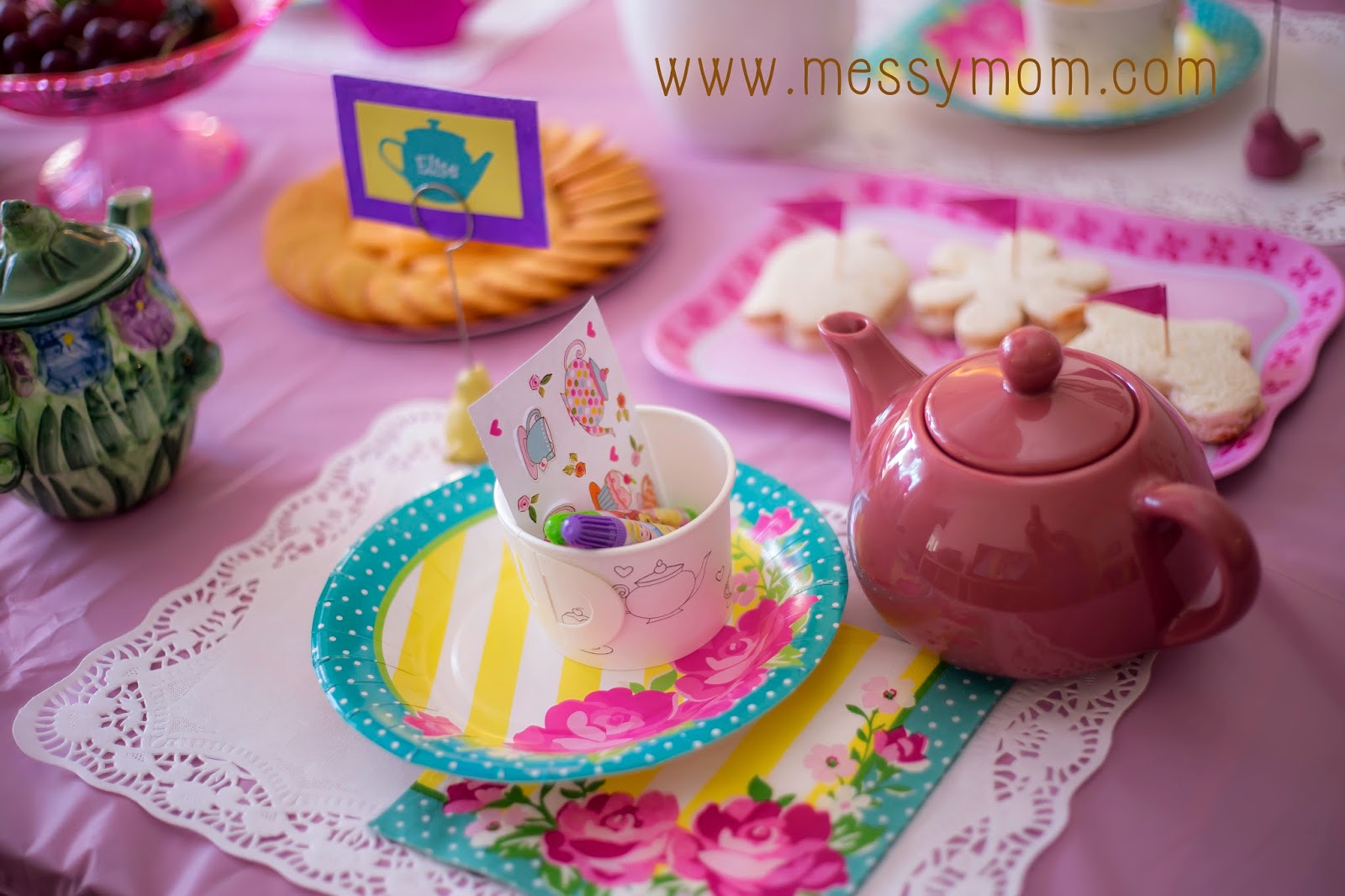 The birthday cake was a tower of cupcakes decorated with flowers, sprinkles, and butterflies! 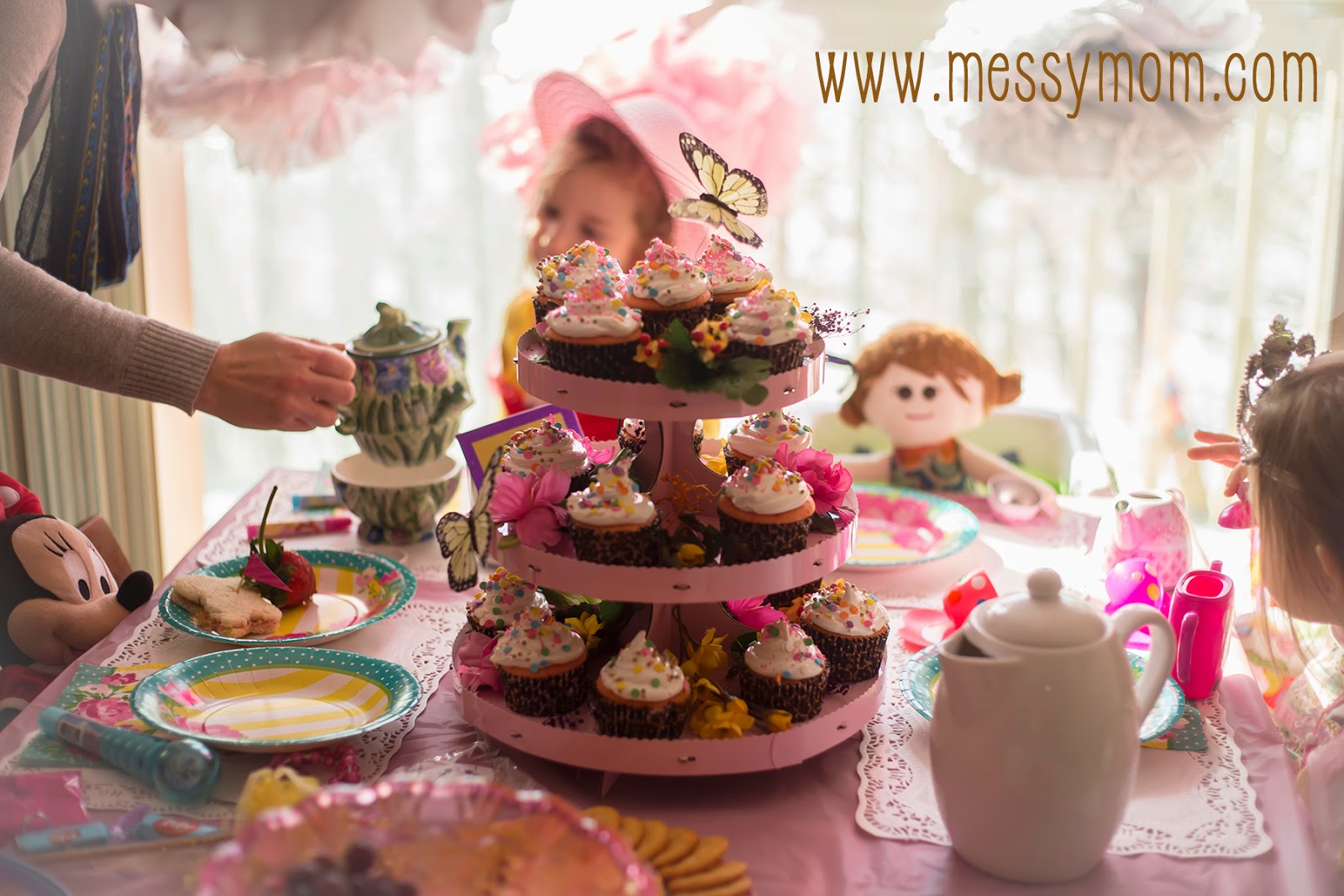 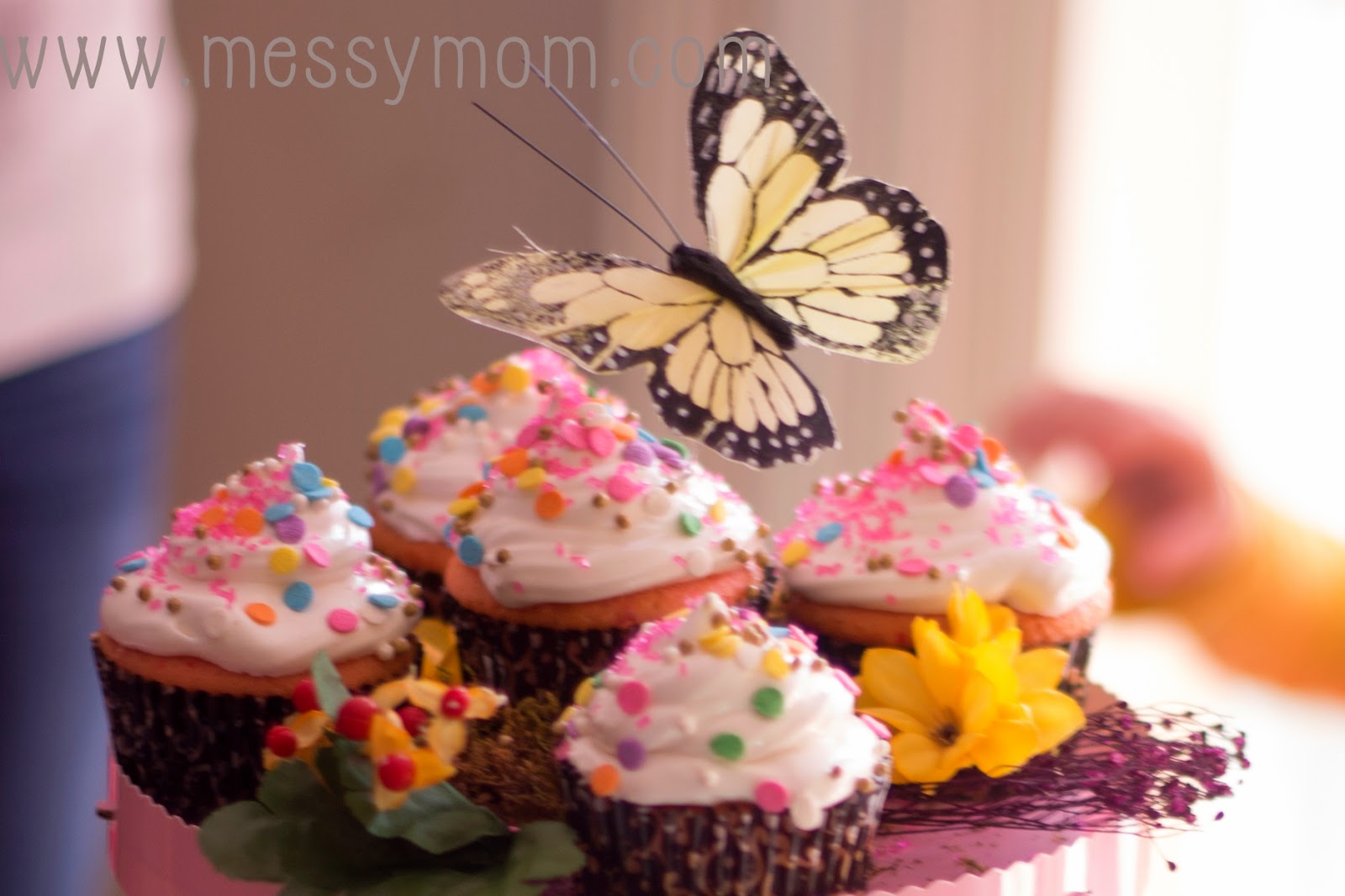 Nothing says party like a tissue pom poms. Keeping with the theme of imperfection they were not the Martha Stewart fluffy flowers you might be used to, but they were festive. 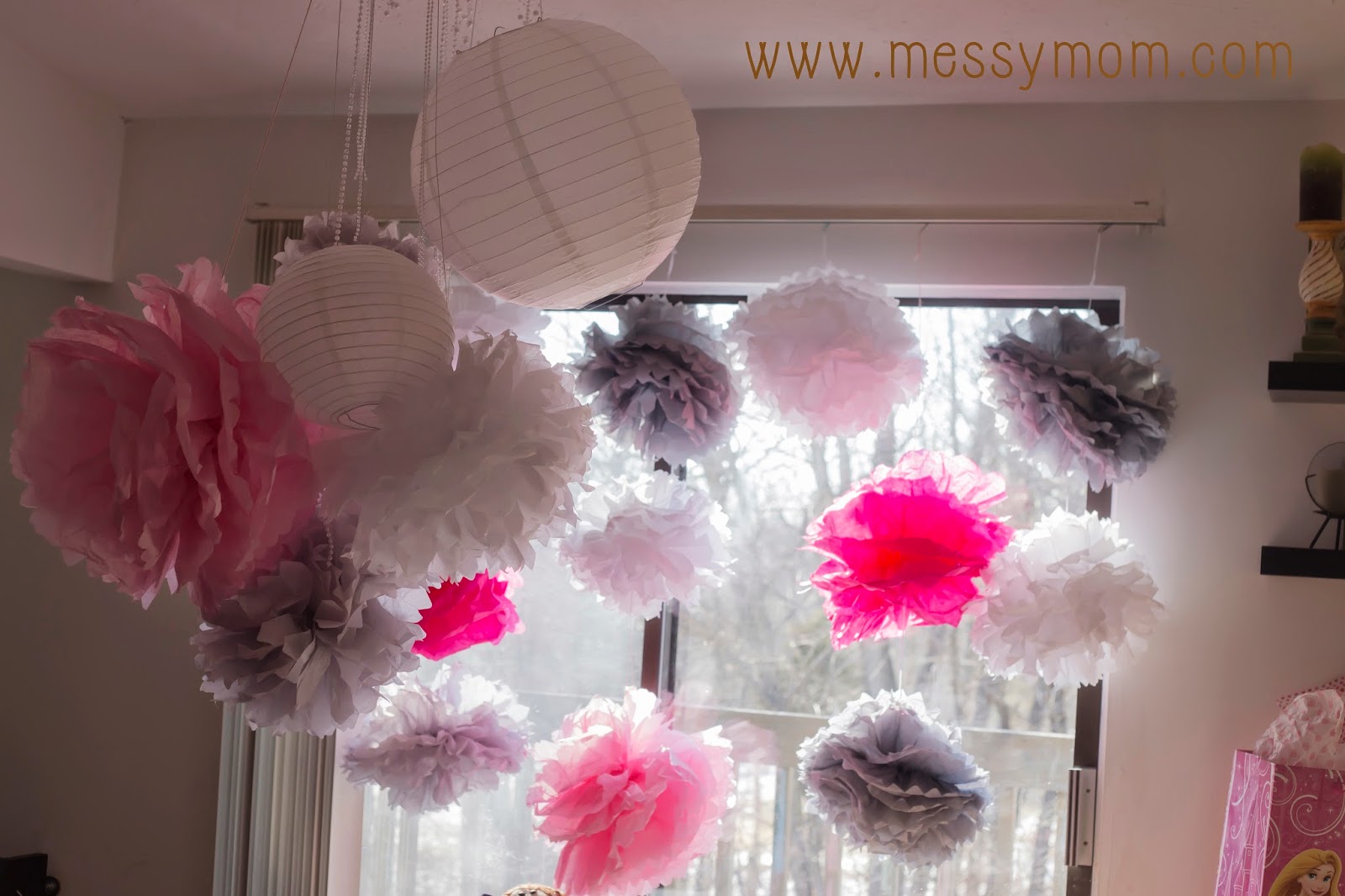 Most of them I borrowed, but I made a couple and bought one that I never managed to use (go figure). 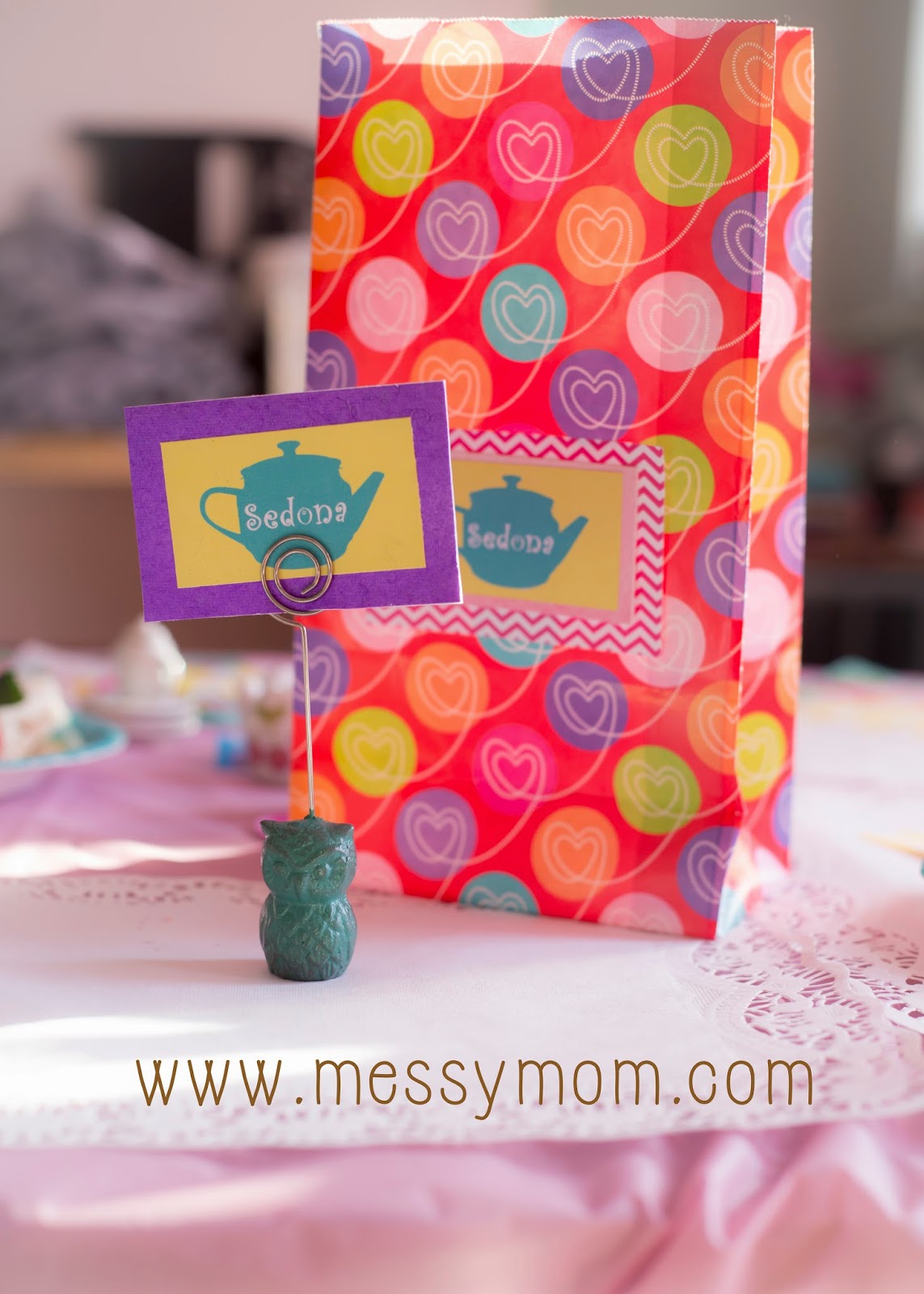 Lastly, I made place cards using some of the info in a tutorial on Style Me Pretty. Then I printed out the same name tags for the goodie bags. The bags were clearance from Valentine’s Day so they cost 19 cents. With SJ’s birthday being on March 4, I don’t know if there will ever be a year that her party doesn’t have something from a Valentine’s clearance rack.
That’s most of the decor, although I didn’t even have time to get pictures of it all. As always you can follow me on Pinterest to see where some of the inspiration comes from. The board “SJ’s Tea Party” is where I pinned ideas for this party.
By Natalie| 2018-07-13T16:09:17+00:00 July 12th, 2018|Uncategorized|1 Comment