Today is the 3rd installment of the How We Met series and the guest blogger is Heather Hollander sharing how she met her true love. With the fluorescent lights above me and the white tile floor below my feet, I stood in the local Santa Cruz, California K-Mart with a few of my girlfriends when I first met Blake Hollander.

He was with a group of guys, one of whom I knew who introduced the group he was with to the group I was with. I had just gotten off a plane from NC hours earlier, and I along with the others needed a few necessities as we prepared for our summer away from home in this new and very interesting part of the country. I remember shaking Blake’s hand, and to me, in that moment, he was just a boy. He was a boy that I didn’t really want to have much to do with, just like I didn’t want to have much to do with any of the boys that I would be spending the summer with.

I had just recently finished up my 4th year of college, but after the many changes in majors and concentrations, I had a whole other year of college waiting for me in the fall. (5 year plan-ers unite!) The summer before my last year of college was beginning, and it was to be spent in a beautiful part of California. I came alongside dozens of other college students from all across America hoping to grow in their walks with the Lord, serve in a place that was not their own, and bring glory to Jesus through summer project with Campus Crusade for Christ (now called Cru).

I went that summer with the intent to grow, serve, and pour into the other girls on the trip, and to  pay no mind to the boys. I had walked through heartbreak and had been distracted by boys before, but that was not going to be the case in Santa Cruz. I knew my purpose and I had a plan, and meeting a boy who I would marry was not part of that plan.

Interestingly enough, even being in Santa Cruz that summer was not exactly my plan either. I had originally thought I would spend the summer overseas in Russia, where I had been the summer before (and where I had met the guy who introduced Blake and I in the beginning of the story), but then decided instead to go on a stateside mission trip. My plan was to go to Russia long term after I graduated, so, since I knew I would surely be back there soon, I thought it would be a good opportunity to do something different and serve in the U.S. instead. But then I changed my mind and plan all together and decided I’d just stay home for the summer! You know, since I knew I was going to be heading to Russia long term and all, I thought spending time with my family and church that summer would probably be best. What I didn’t know was that halfway across the country there was a boy in Oklahoma that had also decided against going to Santa Cruz for the summer too. He had planned to go, but he changed his mind.

God had a different plan for us.

And there we were, on June 8th, 2004 shaking hands and meeting one another for the first time at K-Mart in Santa Cruz.

Knowing the backstory definitely points to the miraculous nature of this moment and the rest of our story. If not for God directing our steps we would have never met. I would not have noticed his character and his servant’s heart. I would not have prayed and prayed for the Lord to guard my heart as his character and person more and more resembled the type of man I could only hope to marry one day. I would not have said yes to his invitation to coffee and I wouldn’t have heard him declare his hope to pursue me. I wouldn’t have been shocked at this declaration, because surely someone like him could never be interested in someone like me. I wouldn’t have felt like simultaneously the luckiest girl in the whole world and the saddest human on the plant when we had to say goodbye to one another as we left California to head back home. And I wouldn’t have said yes as he knelt down and asked me to be his bride nearly 7 months after thinking of him as “just a boy” when we met. We had our plans, but God directed our steps, so clearly to one another.

Less than 365 days from our first meeting in K-Mart, we said “I do” in what can easily be called the happiest day of my life. 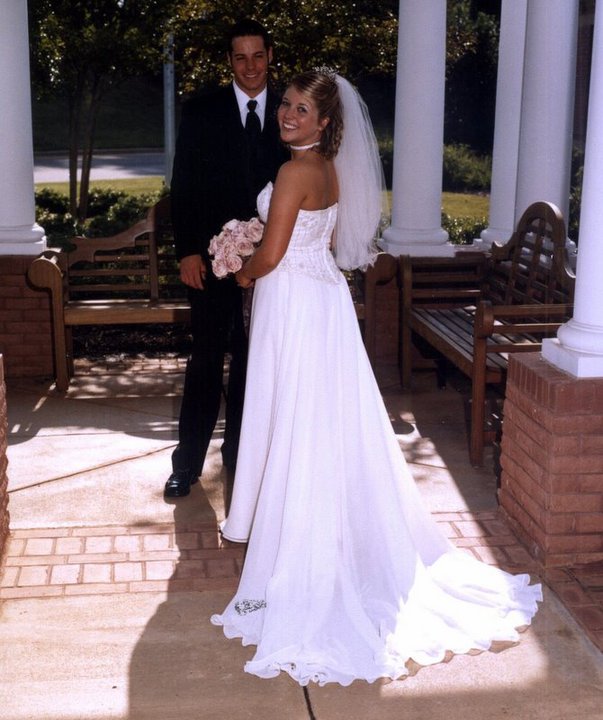 Blake is my favorite person on this Earth, and he was not my plan. Our life and our marriage was not my plan, but I will be forever grateful that he was God’s plan for me.

This coming June 4th we will celebrate 12 years of marriage, and the beginning of our story fits so well with the rest of our story. Much of our life has worked out not at all as we had planned…

We went to seminary in Wake Forest, NC instead of going on staff with Cru, which had been our plan. We have 3 children, all of whom the Lord blessed us with while we were not planning for them. We prayed about and planned to move out west to do ministry, but the Lord planted us in upstate South Carolina instead. And, I’m homeschooling those 3 kids of ours…definitely NOT what I had planned.

Interspersed in the happy unplanned moments have also been unplanned hardships, difficulties, and tough seasons as well. It has not always been an easy road, but it has been a good one. God’s plan for our life and our marriage, through the good and the bad times, has shaped us and has certainly been used to sanctify us.

We have learned deeper how to trust the Lord, how to forgive and repent, how to communicate, and how to support one another. We have learned time and time again that God’s ways are not often our ways, but He is always good and always to be trusted.

So now, as I sit and overhear my Blake read a story to our kids before bed, I take in this moment and I thank God that He didn’t give me what I had planned. This beautiful, unplanned life is more than I deserve, and it gives me hope that whatever we may face in the years to come will be for our good and God’s glory…

Heather is in love with her bi-vocational pastor husband, still sometimes shocked that she’s a homeschool momma to her 3 kiddos, and amazed at the grace given to her in Christ. With an M.A. in Christian Studies from Southeastern Baptist Theological Seminary, she writes about seeking truth, goodness, and beauty, and clinging to hope in Jesus in midst of all life can throw our way. Come connect with this Jesus loving, unlikely homeschooler on Facebook (heatherhollanderwrites), Instagram (heatherannhollander), Twitter (heatherannholla), and currently at www.what-is-perfect.com.