Where Did You Meet Your Spouse?

Today is my anniversary (by the time I finally publish this it will be “yesterday was my anniversary”). I thought it would be fun to take a poll about where my friends met their spouses, and to put a spin on it what would it be like if they got married at that same location? *The online conversation really took off and I got nearly 100 responses between Instagram, a blogger forum, and Facebook.

The thing is, now I want to hear a hundred more details because I have always said I am a sucker for love stories. I actually have a few that I am going to tuck away for a Where Did You Meet Your Spouse? Part II blog post because they are just too good not to elaborate on. Trust me!

Here is the question:

If you got married in the exact place that you first met your spouse where would that be?

And here are some of the answers:


On a football field sideline


A bar (she was the bartender by the way)


At the mall on Black Friday


“In the cafeteria of my university in Thailand. My husband (from Oregon) was part of Cru (Campus Crusade for Christ)’s summer project group.”

That’s just a handful, but there were plenty of people from my poll that had met at college, someone’s house (through friends), or at church. It’s not so much about WHERE you met your spouse it’s HOW you met your spouse that tells the story. For example I noticed a lot of people put the airport. Now before all you single ladies get gussied up and head to terminal E I should explain that a lot of this is because of online dating. More people are falling in love across the county and not even meeting in person until they travel to do so. I also noticed a lot of people had really interesting answers like the food court at the mall, but it wasn’t due to a pick up line by a stranger, it was a chance meeting through mutual friends. This got me thinking.

What is the most common way married couples find one another?

After doing a little research, it looks like my personal poll mirrored the population pretty well. Some reports that I read were conflicting, but it is pretty certain that work/school is number one, with connecting online shortly behind it. Can you believe that 1/4 of couples initially meet on the web these days! All of the studies I read also show meeting through mutual friends being up there as one of the highest ranking ways to find “the one”. Friends introducing friends is one form of match making that has stayed constant through the years, unlike many trends that have fluctuated with cultural changes.

For example in what we’ll call “the old days” more people were set up through their family members. These days families usually have little to no involvement. In the old days people married younger (and were possibly more commitment minded, but that’s just my speculation) so high school or even elementary school were not uncommon places to meet your future mate. In the old days no one met at work, because women didn’t work, but that all changed as more women went into the workforce. Your job increasingly became one of the number one ways to meet your husband or wife up until the 90’s when it started to decline for the first time and meeting on the web began to surface. Online dating now trumps work place relationships by far. Makes sense to me. I am sure it’s less awkward for everyone if you can avoid having to work with exes.

One of the most interesting findings I came across was from Time.com in an article by Laura Blue called “How Couples Meet” it ends with a  statement that caught me off guard coming from a secular magazine, it said:

“But does it really matter how couples meet? Yes and no, the survey suggests. The happiest couples, it seems, are those who met through church. These partners report the highest overall relationship satisfaction.”

That’s good news for me since I did meet my husband at church. It happened when I was a young teenager whose family had to relocate thanks to my dad’s job. I was new at this church and it just so happened that J had taken a part time position as the new worship leader at the same church. As a young college student J was much older than me. So it wasn’t like we instantly fell for each other at, but the first time I saw him he was at the alter leading the congregation in songs to the Lord. After church my family invited him to have lunch with us. 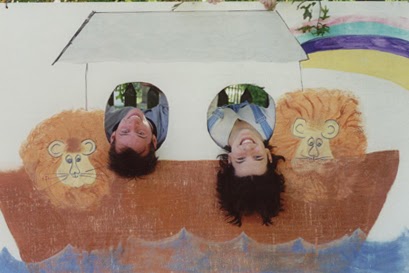 This was about 16 years ago when we were “just friends” Note the overalls when they were trendy the first time!

We became good friends and did eventually fall in love of course. A couple years later we were married at that same church. 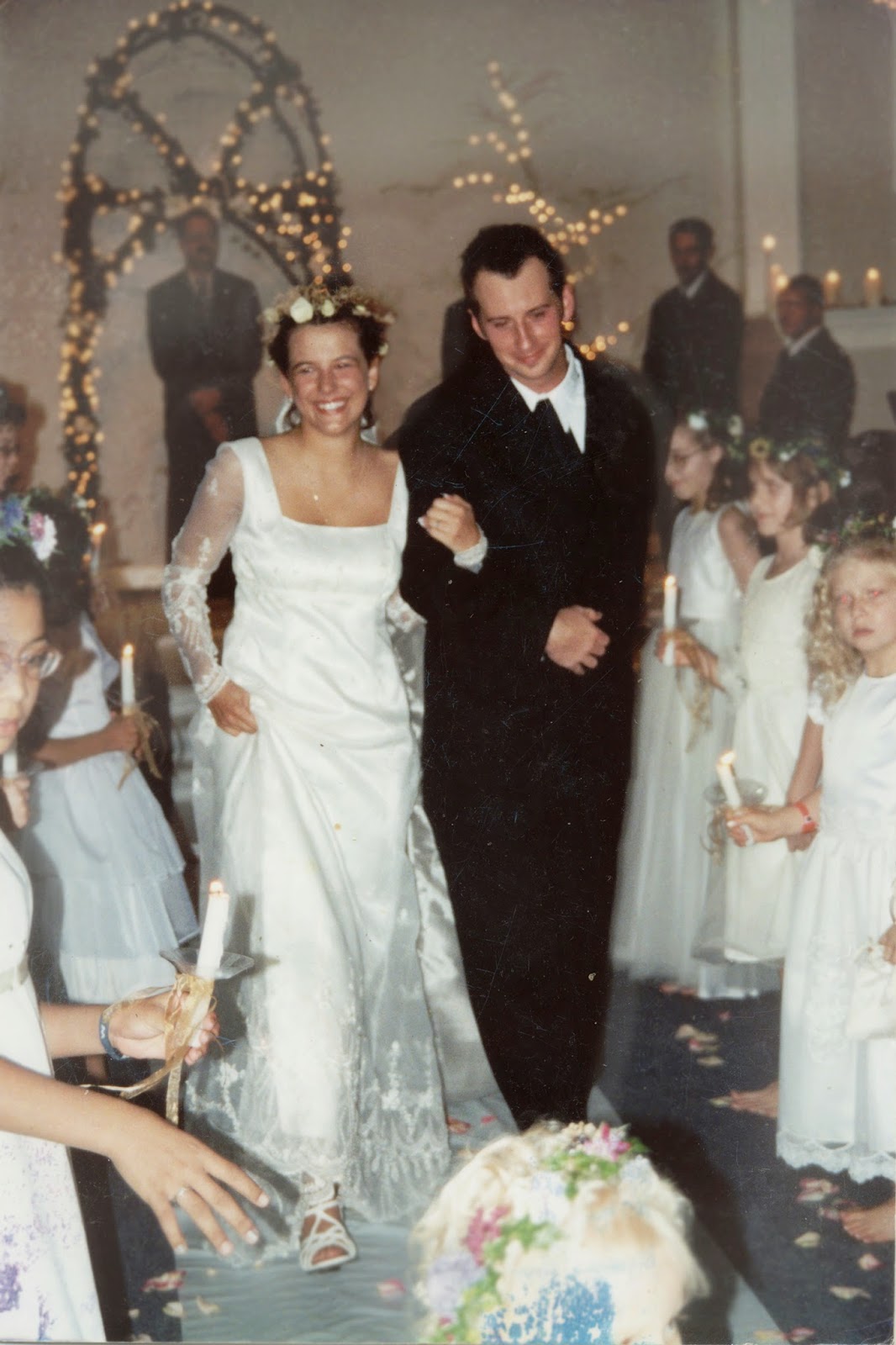 Here is a photoshopped version of a really scratched up scanned photo from our wedding day.

It wasn’t the most glamorous location. Seriously, it was an old metal building on the side of the highway under a giant billboard for Schlitterbahn water park. I never realized it until today, but our ceremony 14 years ago was almost a symbolic reenactment of the first day I ever laid eyes on him. Me at the back of the church walking down the aisle seeing him up at the alter. It was special.

One of the things I have really enjoyed about reading everyone’s answers  to that question I posted online today is that you could just tell by the way people responded that everyone was reliving that life changing moment. Sometimes it’s nice to reminisce, and today I have enjoyed doing it with all of you. So, thank you to everyone who helped me out with this little whim of a project. Or for my married friends that didn’t have a chance to answer feel free to share your story in the comments. I’d love to hear it. You know how I feel about love stories!